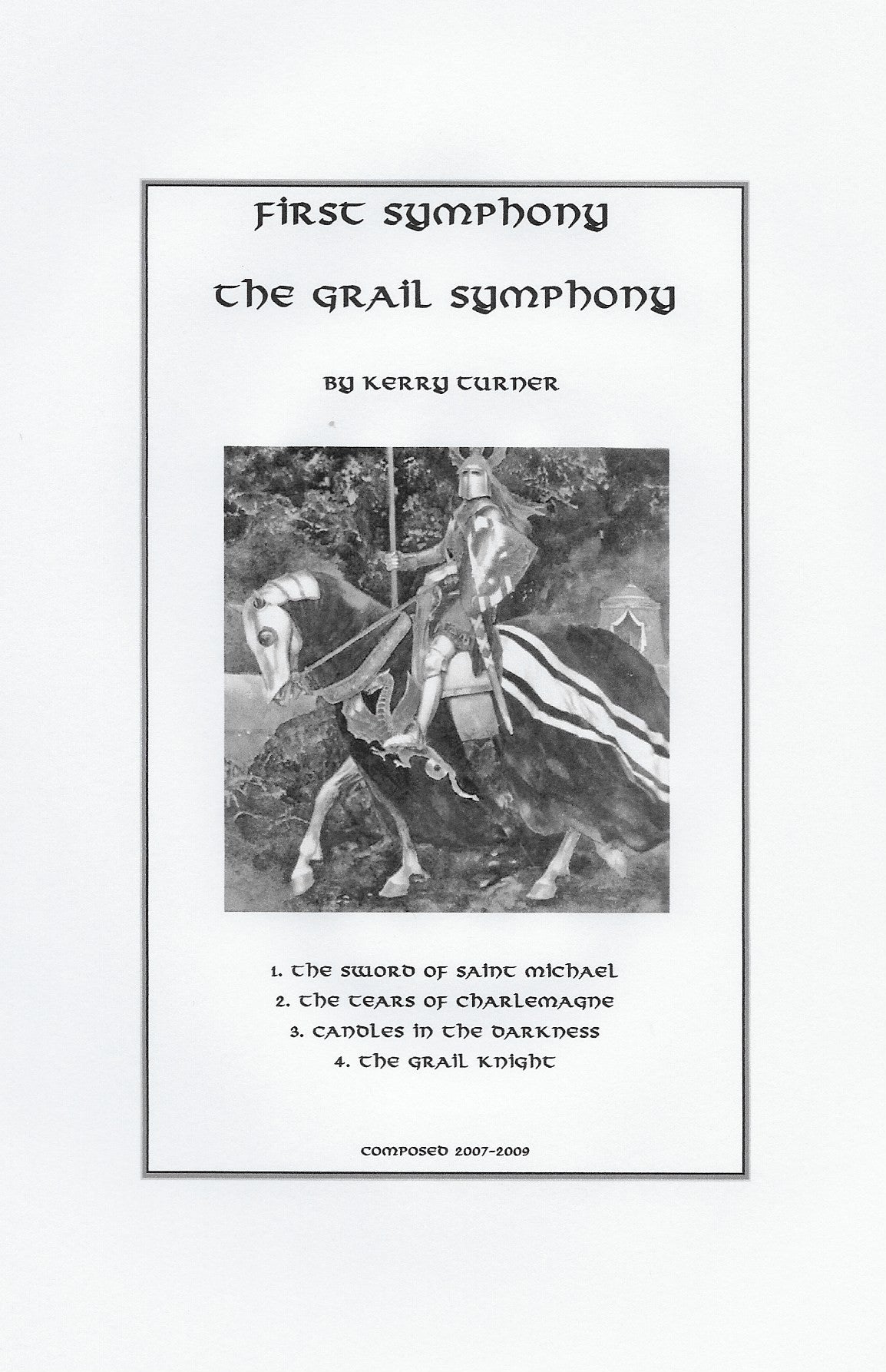 “The legend of the Grail, more than any other western myth, has retained the vital magic, which marks it as a living legend capable of touching both imagination and spirit. No other myth is so rich in symbolism, so diverse and often contradictory in meaning. And at its core there exists a secret which has sustained the mystical appeal of the Grail for the last nine hundred years, while other myths and legends have slipped into oblivion and been forgotten. Something seems to grip the Western imagination when we talk of the Holy Grail. Some alchemical process appears to be triggered in our collective unconscious, transforming this often muddled and confused story into an archetypal dream image of the Ultimate Quest for All and Everything.”

From “The Holy Grail, Its Origins, Secrets and Meaning Revealed” by Malcolm Godwin, Barnes & Nobles Books

Searching for a subject matter on which to base this symphony, or indeed a focus or inspiration which would allow the muse to flow, so to speak, I found the legend of the Holy Grail to be irresistible. After having read all of the known traditions of the story, for example the Christian, the Chymical and the Celtic branches, I elected to adopt a more spiritual interpretation. I was fascinated by what is called “The Stations of the Four Hallows”. There exists a splendid chart outlining the various elements of the four hallows being the sword, the paten, the grail and the spear. The symbolism, which grew out of the various traditions lines up in a mystical, yet logical fashion:

It was not, however, my intention to compose a literal musical rendition or tone-poem about the Grail legend. I wanted to plunge deep into the inner meanings of this complicated phenomenon in order to perhaps make discoveries about myself and my fate, as well as to imprint on the collective human consciousness an explanation of the human condition, a lesson of humility in the past, a message of hope, and a call to mankind to evolve to a higher spiritual dimension. So in this spirit, I present this musical quest for the meaning of The Holy Grail.

Revelation 12, verses 7-12 tell of a great battle between good and evil which took place at the beginning of
time. It is a mysterious passage, which just could, if one were open to it, explain the extreme behavior of man and his on going conflict on Earth. Johann Sebastian Bach dealt with this biblical passage for St. Michaels Mass in his spectacular Cantata Nr. 50. During the deepest throws of composing this movement, it seemed almost a completion of destiny that the music at first quotes and then evolves into a passage from this Cantata.

The Tears of Charlemagne- a Processional (Parzifal, Grail, Water, Autumn)

In the year AD 800, during holy communion at St. Peter’s in Rome, Pope Leo III placed the crown of the Holy Roman Empire firmly on the head of Charlemagne. The great man was deep in prayer as this occurred and according to legend, he wept as he knelt there at the altar. This was the beginning of the fusion of church and state, in which the church became a powerful political institution, with not only all of the glory, wealth, promotion of the arts that this brings, but the corruption, warfare and promotion of ignorance and fear as well. Indeed this turbulent marriage lasted for over one thousand years. Perhaps Charlemagne, on some level, realized the long lasting and dramatic effect this coronation was to have. The complexity of this historic fusion is represented in a giant double fugue processional.

Candles in the Darkness- “It is better to light a candle than to curse the
darkness” (Amfortas, Spear, Fire, Summer)

Out of the deep and murky past with its profound troubles there is yet a small spark of hope. Somewhere in the pitch black, a candle has been lit. All it takes is one small flame to reinstate one’s orientation. Then one can light another candle, and yet another, until the room, the city, and country and the world are glittering with healing and illuminating light. In the Grail saga, the spear is the hallow which heals the land, regenerating and restoring fertility and life.

According to the Grail saga, Gawain heard the voices of maidens calling him to a castle. In the banquet hall, four maidens appear, bearing a cup, a lance, a sword and a dish. Gawain must ask the question, the ultimate and innocent question, which will heal the Earth and set mankind free from its curse. Obviously, there is a plethora of symbolism in this episode. But the final message seems to be a call to mankind to awaken from its long and cursed slumber and heal itself and the Earth. Indeed, it is time for humanity to evolve to a higher, more spiritual plane. The “other-worldly” and mysterious procession of the four maidens is represented compositionally in a fugue, which is created on a 24- note dodecaphonic row.

A note on the harmonic language of “The Grail Symphony”: This work was composed in the 21st century. The previous century was an extremely turbulent one for the development of compositional style and language. Indeed, it seemed as if everything had been done and there was no longer the possibility to utilize tonality as a legitimate style. Those who promoted, even to the point of exclusivity, this way of composing were failing to recognize a beautiful truth. We composers have inherited a vast wealth of possible styles, techniques, tonalities and instrumentations. In the new century, we are freer than ever before to draw on this inheritance. This is particularly in line with the message of “The Grail Symphony”. It is indeed time for classical music composers to awaken and evolve to a higher plane.