Some of our random publications:

Some of our Featured Composers:

Kerry Turner has gained international fame both as a composer and performer. His numerous compositions have earned prestigious awards throughout the world and have been both performed and recorded by the absolute best musicians everywhere.

Ricardo Matosinhos is a Portugese Hornist, Composer and Educator of international renown. His series of music for Jazz Horn have earned international attention and reclaim.

Phoenix Music Publications is proud to have Steve Schaughency as one of our featured composers, a leading expert on the subject of Jazz and the French Horn. His expertise on the history of jazz has put him in a unique position to develop our new series of publications, “Jazztets“. He is a frequent guest artist/lecturer at Horn Symposiums throughout Europe and the USA, as well as having performed with many of the most internationally renowned jazz artists of the world.

Monthly selected book by our staff 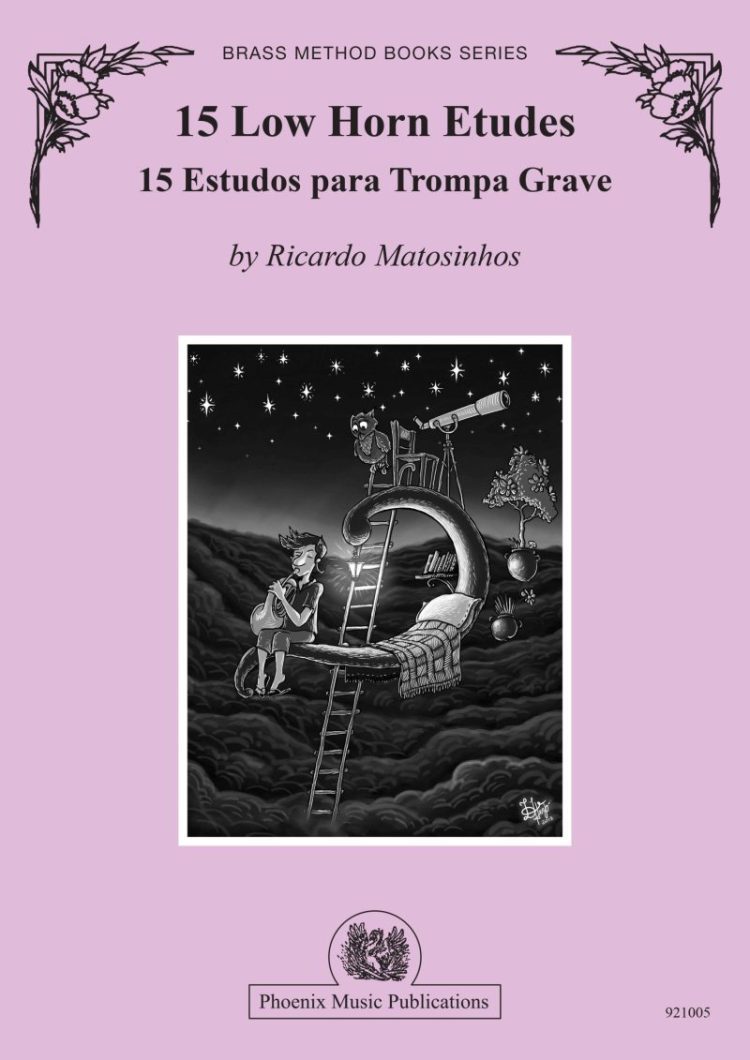 Mr Matosinhos has extended his series of fun etudes, this time written for low horn. Continued in the frivolous and fancy free style as the jazz etudes, these etudes concentrate on the difficulties of the low horn register, a register that is often ignored both by students as well as publishers!
This book is dedicated to Sarah Willis for all her work as a low horn player and for being such a big inspiration for all hornists.
This is the third etude book for horn written by me, which was fun to do, but also a personal challenge as during the whole process I have been fighting against my worst nightmare. By way of explanation, I find the low horn the most difficult range to master.
There are many high horn etude books but very few for low horn, which is just as interesting and really deserves to be promoted more. Most times, it seems to me that the great majority of students is simply obsessed with high horn playing and tends to forget to practice the middle and low register, which I find very unfair as they are amazingly appealing. Furthermore, not all books available for low horn are exactly fun to play, which has proved to be another hardship.
The aim of this book is to practice the horn’s low register at different difficulty levels. These etudes use different styles with a strong rhythmic component, some extended techniques and, of course, a lot of fun!
Etude no.1 – Written entirely in F clef, with a range of 2 octaves without going further than the middle f. It is based on an ear catching F major melody, though the meter is always changing.
Etude no.2 – Composed as an F Blues. It has a range of approximately 3 octaves. All through the etude there are many horn chords, flutter tongues and several jumps as well. Each harmony repetition proposes new and fun challenges to the player. There are no printed dynamics, which allows the player to choose his own.
Etude no.3 – Based on a 4 bar ostinato. If this Etude is played entirely on a Bb horn, only the third and sometimes the first finger will be used . Several difficulties occur as a result of constant jumps that should be played gently without cutting the melodic lines.
Etude no.4 – Mostly written on minor harmonic scales and inverted arpeggios, again there are no printed dynamics leaving these to the discretion of the performer. When there are constant 16th notes, the performer should breathe as necessary, making a small ritardando but without chopping up the phrases.
Etude no.5 – Built on a minor pentatonic and a blues scales. If played on a Bb horn, mainly the 3rd finger will be used.
Etude no.6 Composed using the constant alternation of different whole tone scales and augmented arpeggios.
Etude no.7 – Written in C minor, this etude is filled with syncopations, as traditionally used in Brazilian music. In the end, the half valve effect intends to imitate the “cuíca” (a traditional brazilian music instrument).
Etude no.8 – Built as a Blues in G, with expressive jumps, lip bending and different glissandi. It should be played introspectively with a little rubato but a clear rhythm.
Etude no.9 – Starting with a slow introduction on hornchords, it is followed by a faster section working on jumps. In the end the “ploc” sign refers to the intended sound. The player should remove the first valve slide without pressing the valves.
Etude no.10 – Based on Augmented 4ths and minor 2nds. The introduction and finale should have a misterioso character, but always legato. The middle section should be energetic.
Etude no.11 – With a comic character, inspired by Caprice No.39 by Francisco Jose de Goya (1746-1828), where a donkey contemplates a family photo album and realizes his grandfather was already a donkey. The first half of the etude refers to his sad contemplation. However this feeling changes quickly into a comic and fast section, where the donkey accepts his fate and decides to carry on with his life. The final glissandi intends to imitate the bray of the donkey.
Etude no.12- Based on a melody used in several choral works by Johann Sebastian Bach (1685-1750). The etude is entirely written on horn chords and the indicated horn chords refer only to the played and the sung notes. Extra notes in some chords are to be expected.
Etude no.13 – With a comic character, it intends to illustrate what someone feels when a stubborn sneeze insists on not happening. There are many off beat notes at the end of the phrases and these are intended to illustrate this feeling. After several attempts and frustrations illustrated by furious crescendi, the sneeze finally happens in the last bar.
Etude no.14- Based on D major and D blues scales, with a cantabile and leggiero character. The meters are changed by different syncopations, but these should always be played with an easy feeling.
Etude no.15- Built on the mixolydian mode, based on major arpeggios separated by one tone and their inversions. Some sections include jumps and sometimes contain a few horn chords. It is very amusing to play.
I hope that you can learn much from these etudes, but not less important is that you have fun with them!
Ricardo Matosinhos

Get notifications of new releases, follow new developments, as well as qualify for SPECIAL DISCOUNTS by subscribing to our newsletter.