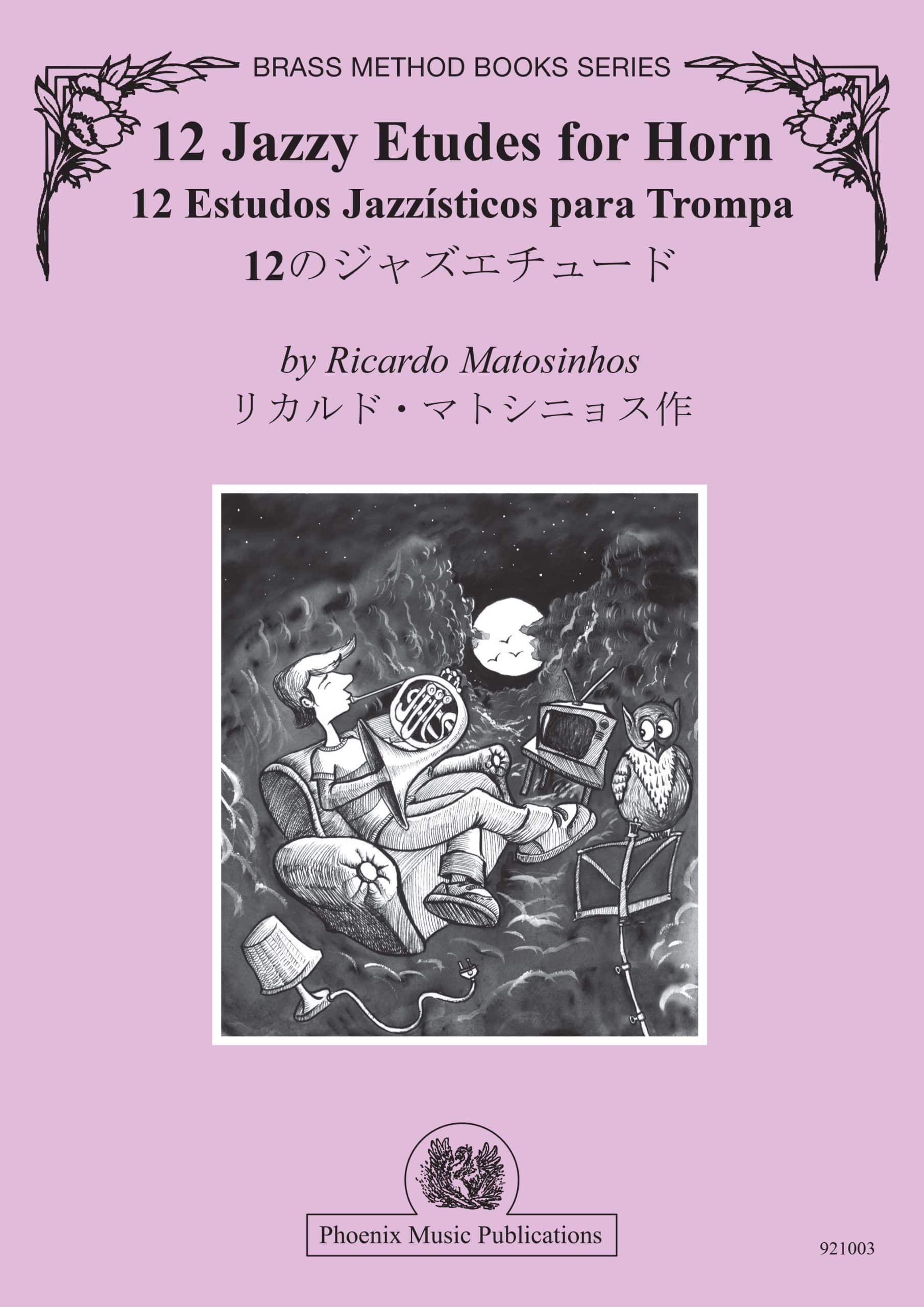 Written for the advanced student to professional, these etudes feature different techniques that are essential to horn playing. In a fun, fanciful and whimsical style, Mr Matosinhos focuses each etude on a different technique, always within a style heavily invluenced by Jazz. 24 Pages. Dedicated to Arkady Shilkloper.

These etudes were written with the aim of filling a gap in the Horn repertoire. Usually advanced etudes for horn are too difficult in many different aspects at once. In these etudes I used different scales and modes with some extended techniques, but always in an easy and funny way; if an etude is difficult or even very difficult in one aspect, it will be easy or even very easy in others. I dedicate these etudes to the Russian horn player Arkady Shilkloper and his music, whose influence will be easily identifiable in some of these etudes.

Etude nº1 – This Etude is intended to work with different rhythms of valeur ajouté (added value) similar to Olivier Messiaen’s writing in that, contrary to other methods, I’ve decided to make the rhythm difficult but make every other aspect easy. For instance, the range is about one and a half octaves (B2-F#4) and, technically speaking, if this Etude is played entirely in Bb horn, only the first 2 fingers will be used. The chosen mode is lydian dominant (4th mode of the ascended minor melodic scale).

Etude nº2 – This Etude intends to juxtapose 3 rhythms that may be confusing (Bars 1, 3 and 7). In the transitions between 3/8 and 5/16 the length of 1 bar remains the same. As indicated, one should swing on 3/8 and 5/8 bars and play straight on the 5/16 bars.
The idea is to interrupt the end – the player should not move for 2 or 3 seconds leaving the listener to guess the inevitable unplayed “D”.

Etude nº3 – This Etude is based on the D major pentatonic scale. It should be played at the tempo q = 120 or more, since this is usually the speed barrier between single and double tongued staccato. In order to be more effective, this etude should be played in both single and double tongued staccato. If played on Bb horn the 2nd finger remains pressed down and only the 1st finger moves.

Etude nº4 – The same way some medicines have a funny taste and need to be taken with orange juice, quarter tones are also “difficult to digest” in our occidental half tone trained ears. I’ve created this etude in a form of a blues with the aim of making it easier to practice this technical resource for the horn. The indicated positions are for the 7th, 11th and 13th harmonics of the double horn that are already naturally sharp/flat. Within this etude all the quarter tones between F3 and G4 will be processed. For more information about the microtonal potential of the Horn please read: Douglas Hill’s “Extended techniques for the horn: A practical handbook for students, performers and composers” from Warner Bros. Publications, 1996 (ASIN B00072T6B0) and David Robert Whaley’s “The Microtonal Capability of the Horn”(Illinois Univ., 1975).

Etude nº5 – This etude is based on the whole tone – half tone D diminished scale. It should be played as fast as possible while making sure that all notes and articulations are clearly played.

Etude nº6 – The Lydian mode appears in this Etude ornamented with energetic jumps and trills that should sound like a joke.

Etude nº7 – This is written in the form of a dance with variations on an F# whole tone scale. Most of the time, the Etude is played in the medium-low register of the horn. Each 8 bar phrase brings us new intervals (major 3rd, augmented 4th, augmented 5th, minor 7th, 8th and major 10th).

Etude nº8 – In this Etude intervals are played that come from the equal division of one octave (minor 2nd, major 2nd, minor 3rd, major 3rd and augmented 4th). The aim is to maintain control of a good legato, despite the speed or the intervals. There is also an echo effect created by the chords in unison and octave. At the end there are also chords, but this time the lowest note should be sung while the upper note should be played. Another difficulty in this Etude is the subdivision of the quarter notes into 64th notes at the tempo q = 32.

Etude nº9 – Playing stopped notes on the horn has several difficulties. As if it wasn’t hard enough to play these in tune, we also need to play these in different positions and to be able to change the hand quickly. The aim of this etude is to work on only one of these difficulties: the speed of the right hand. It is based on one stopped note at different speeds. You should avoid glissandi or pitch changes between stopped and open sounds. This Etude is built on a minor pentatonic scale, if played in Bb horn, only the 1st finger is used (and the 2nd for the stopped notes).

Etude nº10 – This etude is based on the Ahava Rabboh mode, the 5th mode of the harmonic minor scale (mixolydian b9 b13). Always alternating binary and ternary rhythms, it “touches” an Arabic sound with some extended techniques such as chords on 5th’s and octaves, arpeggios with the right hand, fingernails on the tuning slides and percussive air effects.

Etude nº11 – This etude is to be played in different harmonic series. The slashed indication above (in F, in Eb etc.) doesn’t mean that these sections are to be transposed, they indicate tube lengths (ex: in D = F horn + 1+2). This kind of notation can be found in the 2nd movement of György Ligeti’s Trio for horn, violin and piano. The microtonal signs refer to naturally sharp or flat harmonics of the relevant harmonic series.

Etude nº12 – This etude is built on horn chords in two sections. In the first half it is intended to explore the tuning beats, using them as dynamic effects. In the second half the aim is to practice parallel horn chords on 5ths, 6ths, octaves and 10ths.