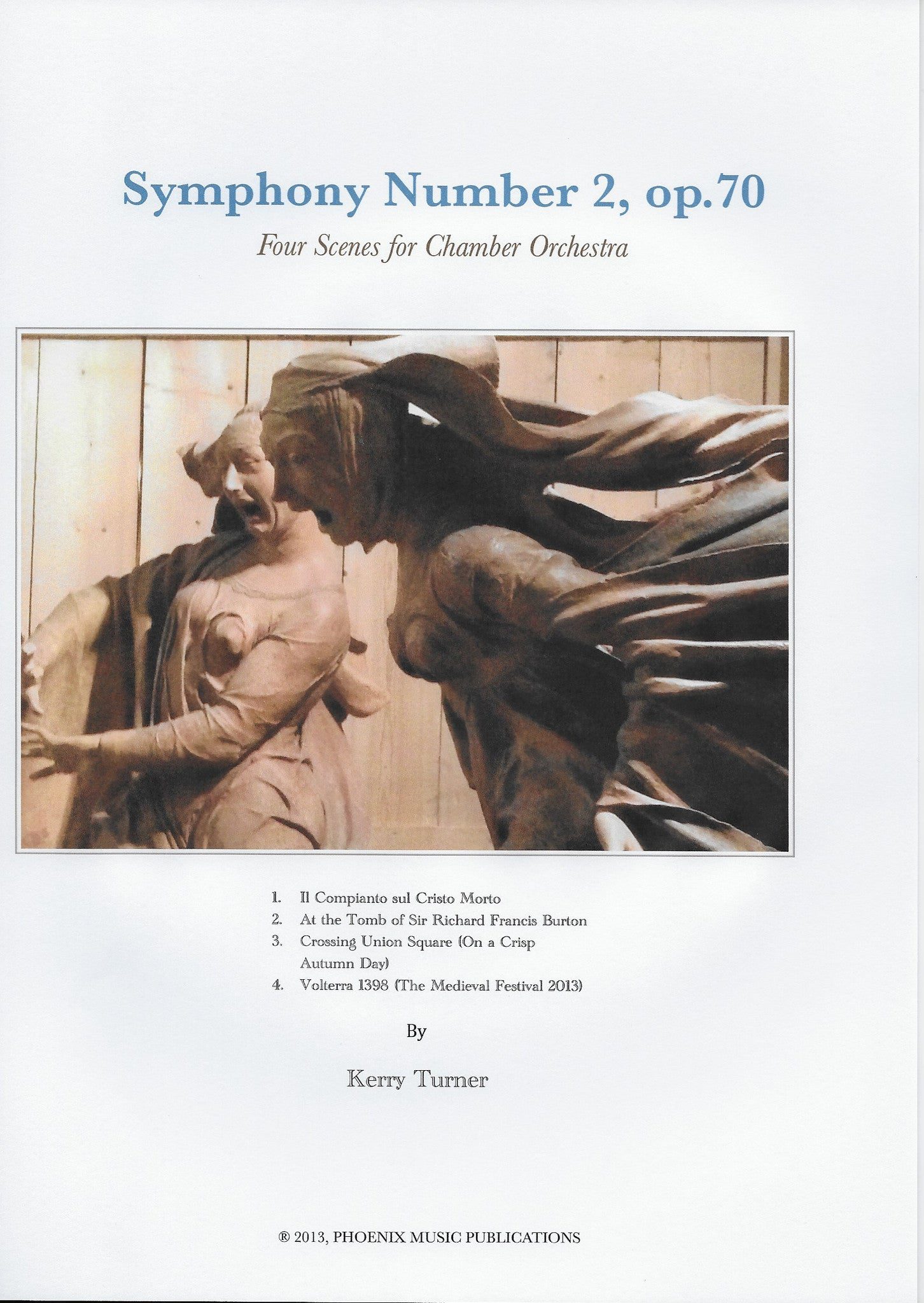 In the summer of 2013, the composer embarked on a lengthy vacation. His travels took him to Germany, Switzerland, Italy, England and New York City. As a principally tone-poem-style composer, he constantly kept an open eye for possible subjects to use in his works. Traveling, history, languages and art are all passions of the composer, and this journey proved to be rich in ideas and subjects.

In the Italian city of Bologna, you make your way through the narrow, medieval streets to arrive at the church of Santa Maria della Vita. Upon entering, this church looks much the same as many other ancient churches in the city. But if you continue further inside to the back, you suddenly come upon a dramatically striking religious sculpture, “Il Compianto sul Cristo Morto” (The Lamenation over the Dead Christ) by Niccolo dell’Arco. This magnificent work of art is set in terracotta and was completed in the 15th century. The figures of the Virgin Mary, Mary Magdalene, the Other Mary as well as brother John weep, wail and run towards the body of the dead Christ.

II. At the Tomb of Sir Richard Francis Burton

Captain Sir Richard Francis Burton (1821- 1890) was an English geographer, explorer, translator, writer, soldier, orientalist, cartographer, ethnologist, spy, linguist, poet, fencer and diplomat. He was known for his travels and explorations within Asia, Africa and the Americas, as well as his extraordinary knowledge of languages and cultures. However his most recognized accomplishments were his undercover journey to Mecca and his participation in the discovery of the source of the Nile River. The mausoleum of Sir Richard Francis Burton and Isabel Arundell, Lady Burton is a representation of a desert tent, its sandstone walls sculpted to resemble cloth rippling in a breeze. It would be an unusual design to find anywhere, but it is a particularly striking monument in a quiet English churchyard. Captain Burton has long been one of the composer’s personal heroes. Two interesting features in the movement: Burton believed that when one was at death’s door, he would hear the bells of the camel. Lady Arundell lined the mausoleum with such camel bells. The repeated song at the end of the movement is an authentic Kenyan folksong.

Union Square in New York City lies at the crossroads of several important neighborhoods- Chelsea, Gramercy, Greenwich Village and the Flatiron District. Emerging from the subway station, one is instantly confronted with an extraordinary cross-section of people – farmers selling fruits and vegetables, African-American musicians playing jazz on the corner, Hassidic Jews making their way to the synagogue, jugglers, dancers, political activists, dog walkers and ordinary people sitting on benches reading books or watching the energetic scene around them. It is surely one of Manhattan’s most diverse and lively parks.

Each year, in the ancient Tuscan city of Volterra, a marvelous and stunningly authentic medieval festival takes place. People from all over the region join the townsfolk in dressing up in all sorts of period costumes and selling arts, crafts and various medieval foods. Walking through the streets, one encounters knights, monks, noblemen, peasants and even barbarians. In the late afternoon, there is a colorful procession with all of the various players participating. It is a very exciting and cacophonous event.