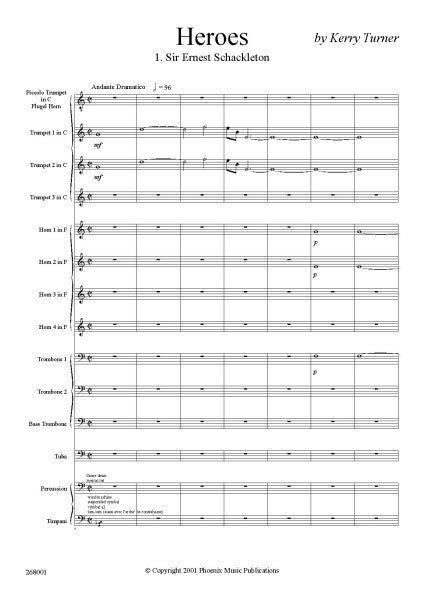 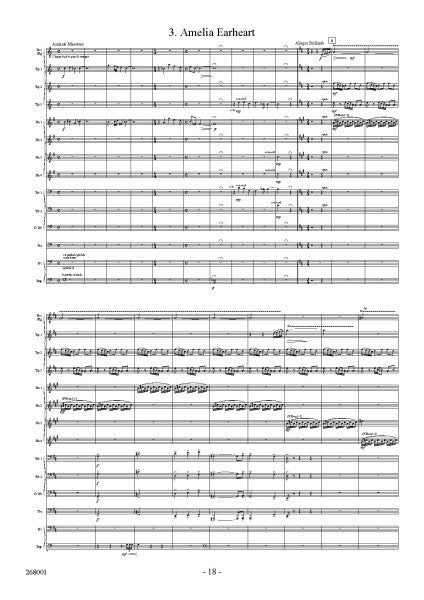 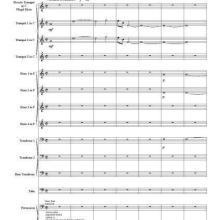 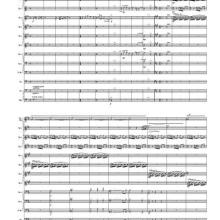 Heroes for Brass Ensemble and Percussion

Heros, a three movement tone-poem for large brass ensemble was commissioned by the Ensemble de Cuivre de 1’Orchestre National de Lyon. Composed in the winter of 1997, the composer wished to pay homage to three people in history who have greatly affected his own life and helped build his own character. Each of the three men and women featured in this work display the one particular character trait which Mr. Turner cherishes above all: undaunted courage.

Sir Ernest Shackleton (1874-1922) has been called “one of the most indomitable and, in some ways, the most luckless of the Antarctic explorers of the early twentieth century.” In 1914, as captain of the doomed explorer ship The Endurance, he and his crew were forced to abandon ship during an exploration of Antarctica when it became completely packed in ice and therefore immovable. With no communication with the rest of the world available, Sir Ernest lead his men to the bleak, barren beach called Elephant Island. From there he and six of his men sailed the small boat James Caird almost 1000 miles across stormy, frozen seas to South Georgia Island, the nearest point of civilization. There he and two others scaled the 4,023 meter Mount Erebus in order to reach a tiny whaling station on the other side. He returned to Elephant Island aboard a little steamer to find all of his crew alive and well. In the face of total catastrophe, Sir Ernest Shackleton risked all dangers to bring his entire crew back safely to England.

Saint Stephen, known as The Proto martyr (died AD 36?), was the first Christian martyr. As part of the original seven deacons of the early church, he was taken before the Sanhedrin on a charge of blasphemy. After what is considered one of the most eloquent speeches of all time, in which Stephen recounted the history of the nation Israel and their resistance and rebellion against God, he stood fearlessly before a powerful group of men who hated him. Not allowed to conclude his own defense of his faith in the new religion, he was condemned to death by stoning. Before he died, it is recorded that the members of the assembly saw something marvelous in his face, as he proclaimed to see the very heavens open above him. It has been said that this man came closer to being an angel than any man who has ever lived

Amelia Earhart (1898-1937), was a famous American female aviator. She was noted for her flights across the Atlantic and Pacific oceans. In June 1937 she began a flight around the world with her navigator Fred Noonan. As they neared the tiny Howland Island in the Pacific, their fuel ran very low and they lost all communication due to stormy weather. An extensive search by planes and ships of the United States Navy failed to discover any trace of the lost flyers, and their fate remains a mystery. Those who knew her spoke of a courage beyond measure. In the middle of this movement, the listener will hear an impression of Amelia Earhart’s final radio communication, represented by the celeste above the background sounds of an airplane engine.