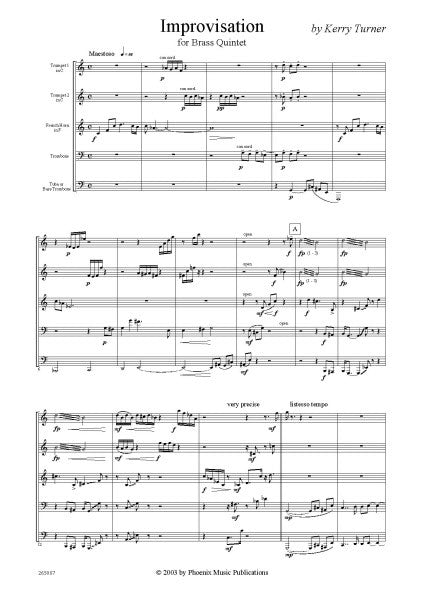 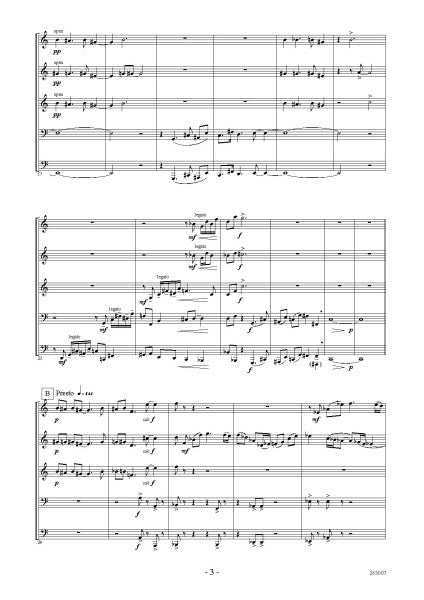 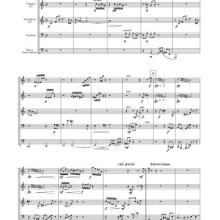 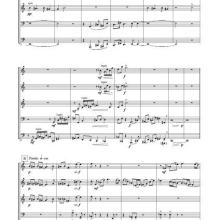 I chose the title “Improvisation” because of the circumstances in which the piece was written. At the time of receiving the commission by the Loraine Brass Quintet, I was doing quite a lot of traveling and didn’t always have access to a piano or keyboard. During the month of April 1998, I had several different motives bouncing around in my head. The theme at the very opening (the listesso tempo after letter A) the motive in the treble voices at letter B and the subsequent fugue theme had all basically been decided on. I just needed to weave them all together in some sort of a coherent form. I had also decided that, with a bit of luck, the natural progression and development of these themes could evolve into a very nice B section melody (the Andante Cantabile after letter H). With this plan, and five days to kill in Chicago, I set about composing the quintet. Not having any sort of keyboard instrument at my disposal, I quite literally had to improvise and hope for the best. About 2 weeks later, I found myself on a flight to Melbourne, Australia via Singapore, where I had planned to stop over for two days. It was on this flight that I had the idea for the ending (approximately letter M to the end). So the first morning in Singapore was spent tagging on that part of the piece.

If a jazz musician is asked to improvise a solo during a number, he will invent variations on the song being played and spontaneously adjust the themes and harmonies to fit his own style, mood and capabilities. That is more or less, exactly what I have done with this piece, hence the name IMPROVISATION.

Improvisation was commissioned in 1998 by the Quintette de Cuivre de Loraine for quintet comprised of two trumpets, two trombones and a bass-trombone. The adjustments to fit a conventional brass quintet were done by the composer.